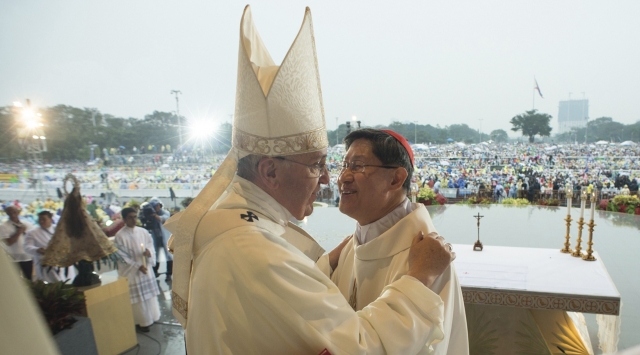 Manila, Philippines, Jan 18, 2015 / 04:39 am (CNA/EWTN News) – The Vatican’s spokesman said that papal history was made Sunday during Pope Francis’ visit to the Philippines where an estimated 6 to 7 million people attended his closing Mass.

“The official number that has been given to us is between six and seven million,” Father Federico Lombardi told journalists at a press conference in Manila on Sunday, calling it the “largest event of the history of the Popes.”

In his homily for the Jan. 18 Closing Mass in the Philippines, Pope Francis pointed to our identity as God’s children, calling for the protection of the family against the numerous attacks that threaten it.

“Sadly, in our day, the family all too often needs to be protected against insidious attacks and programs contrary to all that we hold true and sacred, all that is most beautiful and noble in our culture.”

Pope Francis spoke to millions of Filipinos gathered at Rizal Park in Manila at the final public event during his Jan. 15-19 trip to the country.

Huge crowds have turned out for the Pope’s Masses and public events in the Philippines, where 86 percent of the population identifies as Catholic. In recent years, the island country has struggled with the effects of several typhoons, earthquakes and other natural disasters.

During his apostolic visit, the Pope deviated from both his official schedule and prepared speeches – meeting with impoverished children from the streets and going off-the-cuff in remarks to families on the dangers of contraception and redefining marriage.

Pope Francis will return to Rome on Jan. 19 following a closing ceremony in Manila.