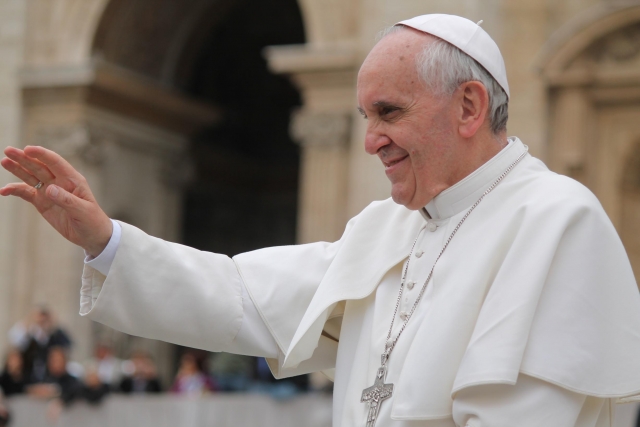 Vatican City, Feb 1, 2015 / 04:11 am (CNA/EWTN News) By Elise Harris – During his Sunday Angelus address Pope Francis announced he will visit the Bosnian capital of Sarajevo in June, where WWI broke out in 1914 with the assassination of Austrian Archduke Franz Ferdinand.

“Dear brothers and sisters, I would like to announce that Saturday, June 6, God willing, I will go to Sarajevo, capital of Bosnia and Herzegovina,” the Pope told pilgrims gathered in St. Peter’s Square Feb. 1.

“I ask you right now to pray that my visit to those dear people is one of encouragement for the Catholic faithful, fosters seeds of good and contributes to the consolidation of fraternity and peace.”

As part of his trip Pope Francis will be visiting the local Catholic community, but will also be entering a nation marked with vast ethnic and religious diversity, which served as a key factor in the country’s recent war.

Pope Francis’ visit to Sarajevo falls less than a year after the July 28 centenary of the start of WWI last year, as well as 20 years after the conclusion of the Bosnian War, which lasted from April 1992 until December 1995.

In a June 16-17 Oasis conference in Sarajevo discussing the temptation of violence among religions, the country’s archbishop, Cardinal Vinko Puljic, spoke with CNA about the ethnic and religious tensions that still linger in the country.

Cardinal Puljic told CNA June 17 that Catholics in Bosnia are “in a grave position.”

Cardinal Puljic is the sixth and current Archbishop of the Vrhbosna diocese in Sarajevo, Bosnia-Herzegovina.

It is a country, the cardinal said, in which Christians, including those from Orthodox and Catholic traditions, Muslims and Jews live together alongside one another.

With such diversity, Cardinal Puljic explained that “We want to create a paradigm for Europe where it is possible to live together with respect and human rights,” and noted that this “doesn’t depend only on communities of different religions.”

It is also the responsibility of “the international community and the local politics who need to create equality.”

Historically divided into three key ethnic groups, Bosnia-Herzegovina is composed of a majority of Muslim Bosniaks followed by a large percentage of mostly Orthodox Serbs and a great population of Croats, a majority of which are Catholic.

The current religious and ethnic situation is complex, Cardinal Puljic observed. The region has seen a series of wars, the most recent of which is the Bosnian War of 1992-1995 in which the country’s Serb population began a policy of ethnic “cleansing” in large areas of Bosnia inhabited by non-Serbs and Muslim, Croat and Serb populations who opposed their army.

With a diverse population of local Christians, Catholics in Bosnia form a minority whereas the Serbian Republic is mostly Orthodox and the Federation is a majority Muslim.

Cardinal Puljic said that there are currently “great tensions between Orthodox Christians and Muslims,” and observed that Catholics “are like catalysts between them. We want to create tranquility (and) a climate of dialogue.”