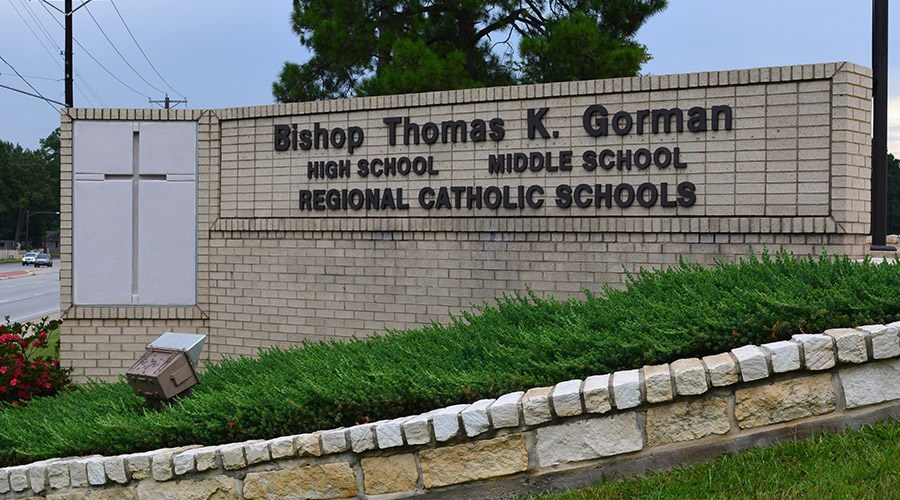 Bishop Gorman Regional Catholic School in Tyler has been recognized as a “School of Excellence” by The Cardinal Newman Society as part of its annual Catholic Education Honor Roll, the organization announced today.

Since 2004 the Honor Roll has celebrated quality Catholic education throughout the United States. Bishop Gorman has been on the national honor roll since its creation in 2004, only one of three schools in the United States that have been on all seven previous honor rolls

“Inclusion on the 2014 Catholic Education Honor Roll for the tenth year in a row is an acknowledgement of the extraordinary things at Gorman,” said James Franz, principal of Bishop Gorman. “The Award recognizes Catholic high schools that excel in the mission of all Catholic schools: formation in the faith, civic preparation and academic excellence. The Award is a commendation for students, parents, guardians, alumni and staff as well as an affirmation for the Diocese and East Texas.”

Honor Roll schools receiving this designation are marked by the integration of Catholic identity throughout all aspects of their programs and excellence in academics. This year seventy-one schools received the honor of being named as a School of Excellence, and an additional nine received the distinction of Honorable Mention. This is less than five percent of the Catholic high schools in the United States.

Bishop Gorman currently enrolls 419 students in grades six through 12. The school is recognized by the Texas Education Association through the Texas Catholic Conference Education Department and most recently received full accreditation in 2012 with “Exemplary” rating by the Southern Association of Colleges and Schools. 100-percent of Bishop Gorman graduates in the Class of 2014 enrolled in post-secondary academic institutions or career training programs.

“Since competition began in 2004, the Honor Roll has been a helpful tool for administrators, families, and benefactors in recognizing the quality of a Catholic high school education,” said Patrick J. Reilly, president of The Cardinal Newman Society. “The Honor Roll schools are a reminder that Catholic education is getting better every day—not only academically, but in the renewal of Catholic identity—and we are delighted to see the increased level of competition among the schools that participated in the program this year.”

This year’s Honor Roll schools are diverse: large and small, new and long-established, highly selective and those with open enrollment admissions policies, as well as a variety of tuition rates. The common trait is an institutional commitment to providing a truly integrated and faithful Catholic education across all disciplines and in all areas of student activities.

The 2014 Schools of Excellence are located in 26 states, with the largest number (eight) located in Pennsylvania, followed by Texas and Michigan, each with six, and Virginia with five.

The Acton Institute founded the Catholic High School Honor Roll in 2004. The Cardinal Newman Society assumed the program in 2012, consistent with its mission of helping Catholic families and promoting faithful Catholic education.