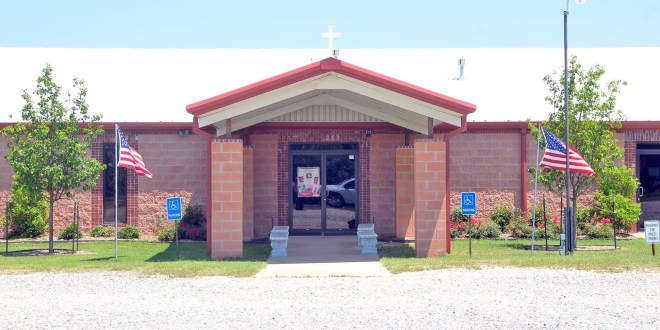 EMORY – St. John The Evangelist Church in Emory was destroyed by one of the tornadoes that ripped across East Texas the evening of April 29. About 45 people were sheltering in the parish hall some 10 feet away from the church during the storm, but no injuries were reported.

Mass was held outside the church April 30, with parishioners gathering “in prayer and gratitude,” according to St. John’s Facebook page.

St. John is a small parish of about 150 families in Rains County. The Catholic community formed in 1994, and was named a parish in 2013.

Catholic Charities-Diocese of Tyler has established a Disaster Relief Fund to assist those affected by the tornadoes that devastated the Canton and Emory areas including St. John the Evangelist Catholic Church.  To contribute to this fund, please follow this link to the Catholic Charities website>>>

Bishop Strickland has also directed that a special collection to assist in the recovery efforts will be taken in up in all parishes and missions of the Diocese on May 6-7.  There is no volunteer assistance needed at this time at St. John’s Parish.

The National Weather Service has confirmed that four tornadoes hit East Texas Saturday night, though more may be confirmed as information is collected. Van Zandt and Henderson Counties were hardest hit, according to local press reports.

Five deaths have been confirmed, and at least 45 people were injured. Local law enforcement is conducting door-to-door search efforts in hardest-hit areas.

Numerous homes and other structures were damaged or destroyed.

Displacement centers have been set up in local churches, and the Red Cross has opened shelters in First Methodist Church Life Center, 600 S. Buffalo, in Canton and the Emory City Center, 735 Texas Street North, Emory. The Sears Home Store in Canton has been designated an animal shelter for those who need a safe place for pets.

The Red Cross has set up a website for those looking for loved ones in affected areas or those seeking to let loved ones know they are safe. See the website here.