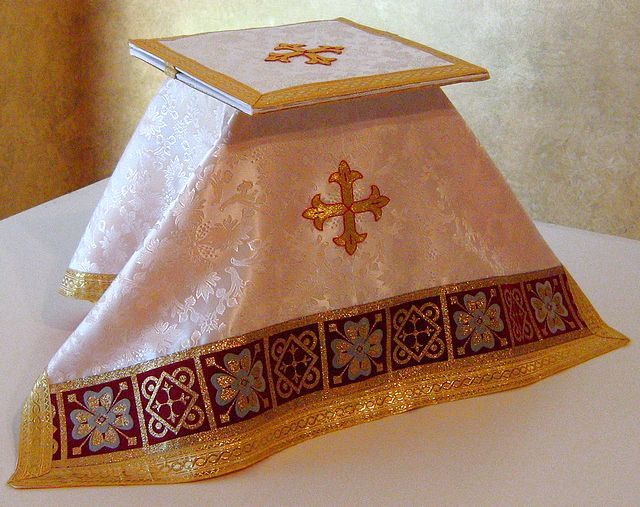 Advent is the season of “remembering” and “waiting” for the King.  Christ, the Light of the World, has already come, but we are still waiting for Him to come again.  Advent is a type of “bridge” connecting the first and second comings of Jesus Christ.  Like the season of Advent, the holy Mass is also a bridge between the two comings of Christ — but it is a more perfect connection.  This form of Catholic worship was not invented by the Catholic Church.  The Eucharist was instituted by Christ at the Last Supper, ratified by His death and resurrection, and extends His real, true, substantial presence until the end of time when He will return in glory.  History and the writings of the early Church Fathers confirm that the Mass was the way the earliest Christians worshipped God.  Although the form, gestures, and some externals have developed over the centuries, the essentials of the Mass have remained the same.  St. Justin Martyr, writing in the second century, attests that a “proclamation of the word” and a “breaking of the bread” were present in the earliest Eucharistic liturgies.

The Church still teaches that intentionally missing Sunday Mass under normal circumstances is a mortal sin, so we are not to take lightly Sundays and holy days of obligation.  Because we are human (and all too capable of just “going through the motions”), we at times need to be reminded of how important the Mass is.  The rich symbolism of the Mass is meant to help us realize that divine worship is to envelop us — to take us out of time and put us into contact with that which is eternal.  The symbolism of the Mass is also a bridge from the Old Testament to the New.

On Sundays in many parish churches, all six candles are lit and near the altar there is a crucifix, which almost functions as a seventh candle.  This harkens back to the Jewish temple, where a seven-branch candelabra (similar to the menorah of Hanukkah) was placed near the altar of sacrifice.  The beeswax candle is a symbol of Christ: the beeswax signifies Christ’s body (bees obtain wax from flowers like the flesh of Christ was obtained from the Blessed Virgin); the wick signifies the soul of Christ; and the flame signifies the divinity of Christ.  The linens on the altar are a symbol of the burial shrouds used at Christ’s death, which were folded neatly after His Resurrection.  The chalice veil is a symbol of mystery and sacredness.  Holy objects and holy people in Judaism were always veiled.  The objects that will contain the Body and Blood of Jesus are veiled before and during Mass as a sign that we do not truly understand what takes place at the Mass, nor are we worthy.  Incense is burned as a sign of God’s presence in His holy temple and of our prayers ascending to heaven, and it has the effect of engaging our sense of smell during the liturgical celebration.

Over the course of the next three Sundays of Advent, I will write on what each part of the Mass means.  Understanding the Mass will help us to avoid “falling asleep” — both physically and spiritually — and will help us to stay alert at the coming of Christ in every Mass.  “Be watchful! Be alert! You do not know when the time will come (Mk 13:33).