Rev. Daniel Dower, STL, has been appointed Episcopal Vicar for Education for the Diocese of Tyler, Bishop Joseph E. Strickland has announced.

As Vicar for Education, Father Dower will assist Bishop Strickland in promoting the Church’s commitment to high quality Catholic education and faith formation in the diocese, and provide overall coordination for those working in the field of education at all levels.

“Father Dower’s work will encompass all aspects of sharing the Catholic faith in the Diocese of Tyler,” said Bishop Strickland. “He will be working with the priests, deacons, and religious, as well as Catholic schools, faith formation, youth evangelization, and Christian initiation and adult formation in order to enhance our efforts to share the treasure of our Catholic Faith.”

Father Dower was ordained to the priesthood for the Diocese of Worchester, Mass., in 1984 and came to the Diocese of Tyler in 2010. He holds a licentiate in Sacred Theology from the Pontifical Gregorian University in Rome.

“I am so very honored and excited to have to have been asked by Bishop Strickland to assist him as Vicar for Education,” said Father Dower. “After the celebration of the Sacraments, most especially the Eucharist, there is nothing we do as priests that is more important than proclaiming the Word of God and teaching our faith to both young and old alike. I look forward to the challenges ahead and helping to build upon the good work that has already begun across the Diocese of Tyler as we strive ever more faithfully to go forth and make disciples of all nations.”

As Vicar of Education, Father Dower will assist the bishop in his mandate as Teacher of the Catholic Faith by establishing a framework for fostering excellence in catechetical and academic education in the parishes and schools of the diocese.

“Father Dower’s efforts are inspired by the ‘Great Commission’ in the 28th chapter of the Gospel of Matthew. I have asked that he begin with an initial assessment of where we are and where we need to go.  He will focus especially on developing ways for our Catholic schools and parish faith formation to collaborate more effectively,” Bishop Strickland said.

Father Dower will continue to serve as pastor of Christ the King Parish in Kilgore where he has been assigned since 2011.  He also serves on the Priests’ Pension Board and is Assistant Dean for the East Central Deanery.

VATICAN CITY (CNA/EWTN News) –  On Friday the Vatican announced that while on his way to Mexico, Pope Francis will stop in Cuba to meet with Russian Orthodox Patriarch Kirill in the first meeting between a Pope and a leader of the Russian Orthodox Church since the Great Schism 1,000 years ago.

“The Holy See and the Patriarchate of Moscow are pleased to announce that, by the grace of God, His Holiness Pope Francis and His Holiness Patriarch Kirill of Moscow and All Russia will meet on February 12 next,” a joint Feb. 5 press release from the Vatican and the Russian Orthodox Church read.

Kirill, patriarch of Moscow and all Rus’ and Primate of the Russian Orthodox Church, will arrive to Havana Feb. 11 for an official visit to South America. His Feb. 11-22 visit includes stops in Cuba, Brazil, Chile and Paraguay.

Pope Francis himself will arrive to Havana’s José Martí International Airport the next day while on his way to Mexico, where he will be on an official visit until Feb. 17.

The Pope will be greeted by both the Patriarch and Cuban president Raul Castro at the airport. From there, they will head to the presidential room of the airport, where Francis and Kirill will have a lengthy private conversation and sign a joint declaration.

In the press release, it was noted that the encounter is the fruit of “a long preparation,” and will be “the first in history and will mark an important stage in relations between the two Churches.”

While Roman Pontiffs have met with other Orthodox Church leaders, this marks the first time a Pope has met with the Russian Orthodox Patriarch since the Eastern Churches split with Rome during the Great Schism of 1054.

Both the Holy See and the Moscow Patriarchate expressed their hope that the meeting “will also be a sign of hope for all people of good will,” and invited all Christians “to pray fervently for God to bless this meeting, that it may bear good fruits.”

In a Feb. 5 press briefing on the encounter, Vatican spokesman Fr. Federico Lombardi S.J. told journalists that when Pope Francis arrives to Havana, he will be greeted with the usual protocol.

Among those present to greet the Pope when he lands will be Cuban president Raul Castro, Cardinal Kurt Koch, President of the Pontifical Council for Promoting Christian Unity, as well as the president of the Cuban bishops conference, Archbishop Dionisio García Ibáñez of Santiago de Cuba.

The private meeting between the two is expected to last “a couple of hours,” Fr. Lombardi said, noting that the time allotted for the encounter lasts from around 2:15-4:25p.m. Afterward, they will head to a separate room to sign a joint-declaration and exchange gifts.

Two interpreters will assist in the conversation: one in Spanish, and one in Russian. The declaration, however, will be drafted in Russian and Italian.

Once the joint-declaration has been signed and the gifts exchanged, Pope Francis and Patriarch Kirill will each give short speech. The Pope will give his speech in Spanish, and the patriarch in Russian.

According to the Vatican spokesman, the speeches will not be long and complicated, but more like a “spontaneous expression of their feelings for this beautiful occasion.”

Delegations from both the Pope and the patriarch, consisting of roughly 10-15 people each, will be presented before Francis boards the plane again around 5:30p.m., bound for Mexico. Both Patriarch Kirill and Cuban President Raul Castro will see him off.

Fr. Lombardi said that while the stop in Havana has been added, Pope Francis’ trip to Mexico has otherwise not been modified, and he should stay on schedule.

Also present for the encounter in Cuba will be Hilarion Alfeyev, who currently serves as Metropolitan of Volokolamsk, is the chairman of the Department of External Church Relations and is a permanent member of the Holy Synod of the Patriarchate of Moscow.

In an interview with Corriere della Sera in June 2015, Metropolitan Hilarion hinted that a possible meeting between the Pope and Patriarch Kirill could be close. He told the agency that “such a meeting is getting closer every day, but it must be well prepared.”

Fr. Lombardi confirmed that meeting between the two was “not improvised,” but has in fact been in the works “for a long time…a couple of years.”

In 1986, St. John Paul II gave us a mission. A mission to build the Catholic Church in East Texas, to develop the Diocese of Tyler. A mission to give all of God’s flock a shepherd’s care.

Many said it couldn’t be done, but today that mission is alive. And one of the greatest resources we have to continue it is the Bishop’s Annual Appeal.

Your contributions to the Appeal are vital to the growth of our Church.

Each year your gifts fund the many youth, family, and charitable ministries that make sure all of God’s Flock receive a shepherd’s care in East Texas.

Your support to the Appeal forms our priests, chosen by God to shepherd our families. Through your generosity, we are able to vastly grow our number of seminarians, providing future shepherds for all our parishes and missions.

Most of all, your gifts provide for the men who have given us a lifetime of service, our retired priests. You make sure they have the love and care that they need in their old age.

The 2016 Annual Appeal will kick off this weekend, February 6th and 7th. Check your mailbox this coming weekend for an invitation to give.

God’s flock is in your midst. Join Our Mission and help give them a shepherd’s care. 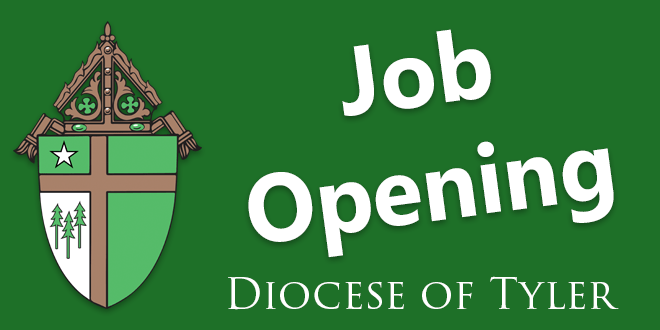 The Diocese of Tyler is seeking applicants for the full-time position of Staff Accountant, Laura Williams, director of finance, has announced.

A bachelor’s  degree in accounting or related business area and three to five years of experience is required. Candidates must be familiar with processing and recording receipts and payables, and have experience with timekeeping, payroll preparation, payroll tax returns, and IRS requirements. Duties will include preparation of financial reports and statements and general ledger reconciliation. Applicants should also be familiar with internal controls and monitoring cash flow.

Excellent data entry and organizational skills are needed as well as the ability to deal with the public and be detailed oriented.  The successful candidate must be a self-starter, service oriented, and able to meet multiple deadlines.

For consideration, please send cover letter and resume along with confidential salary history and requirement to:

Father John Fowler Dies, Had Served in Marshall and Tyler

After serving in the army during World War II, he entered St. John Seminary in San Antonio and was ordained by Bishop Thomas Gorman at Sacred Heart Cathedral on May 30, 1953.

Father Fowler served in many parishes during his priestly ministry. He served as a parochial vicar at Christ the King, Dallas; St. Alice and St. George in Fort Worth; Sacred Heart in Texarkana; and St. Luke in Irving. He was pastor at St. Joseph in Marshall; Holy Name in Fort Worth; Immaculate Conception in Tyler, Immaculate Conception in Corsicana; St. Mary in Sherman, and St. Michael in Grand Prairie. He retired from active ministry in 1997 and continued to help out for many years on a part-time basis in several parishes in the Dallas area.

Surviving is a sister, Catherine Savage, and several nieces and nephews.

Interment will be in the Priests Circle in Calvary Hill Cemetery in Dallas.