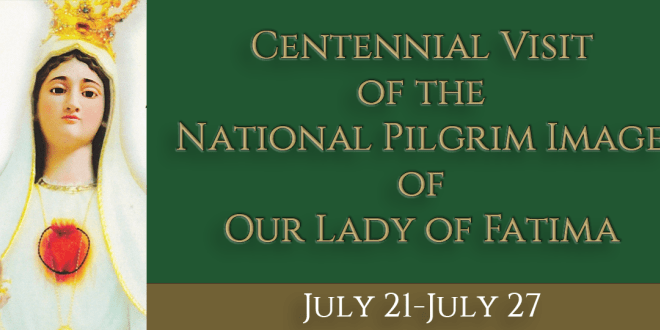 Five parishes in the Diocese of Tyler will play host to a pilgrim statue of Our Lady of Fatima July 21-27.

The statue is one of six blessed by Pope Francis at the Vatican in January and commissioned to tour six of the seven continents to mark the 100th anniversary of the appearances of Our Lady of Fatima to three shepherd children in Fatima, Portugal, in 1917. 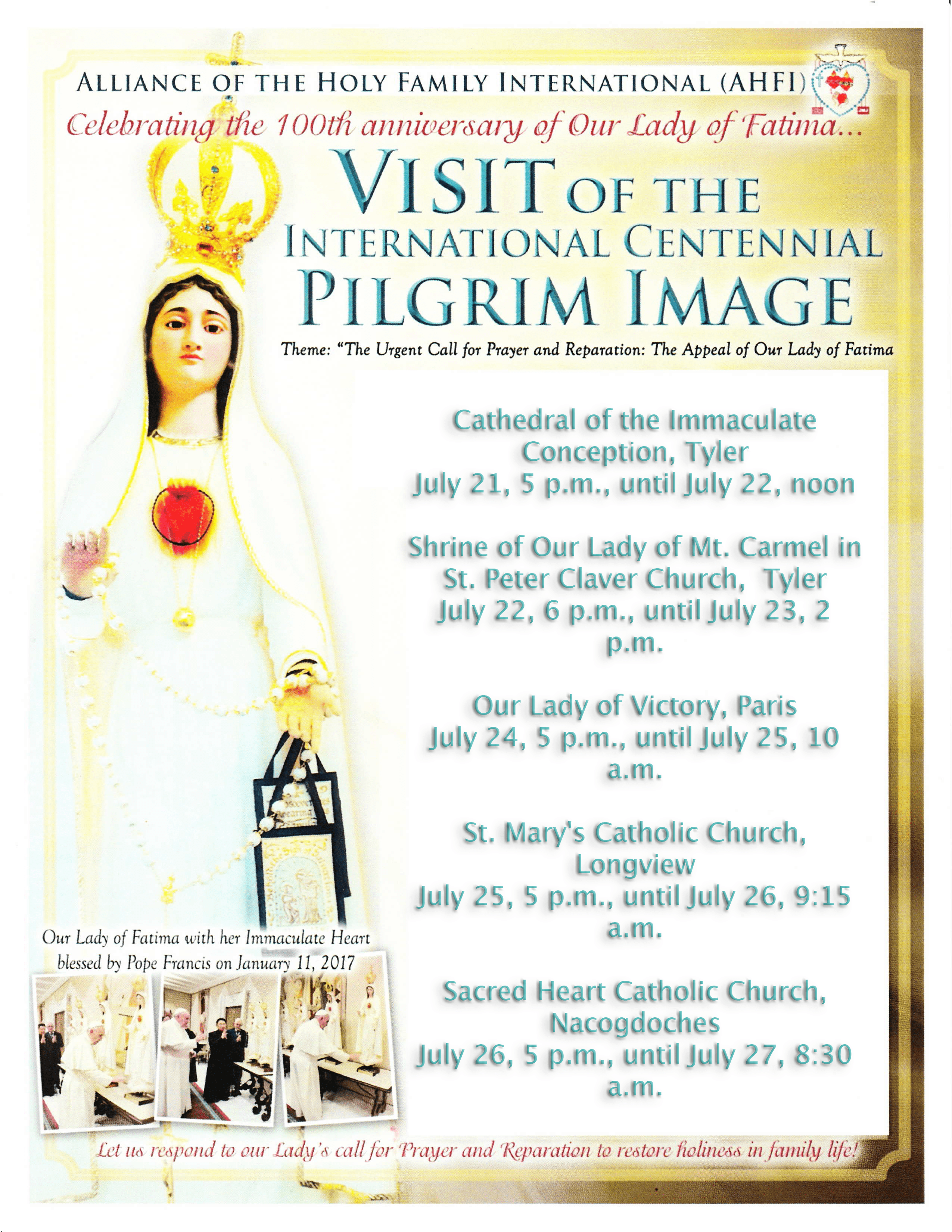 Parishes hosting the pilgrim statue are:

The visit to each parish will follow a similar program, including a procession featuring a crowning of the statue, imposition of the Rosary and Brown Scapular, prayer, confessions, Mass, exposition of the Blessed Sacrament, the Nine Offices of the Sacred Heart, Adoration, Benediction, and Veneration of Our Lady.

Missionaries will be on hand to give talks about Consecration to the Two Hearts (the Sacred Heart of Jesus and the Immaculate Heart of Mary) and to invite families to participate in the Fatima devotions of prayer and reparation. 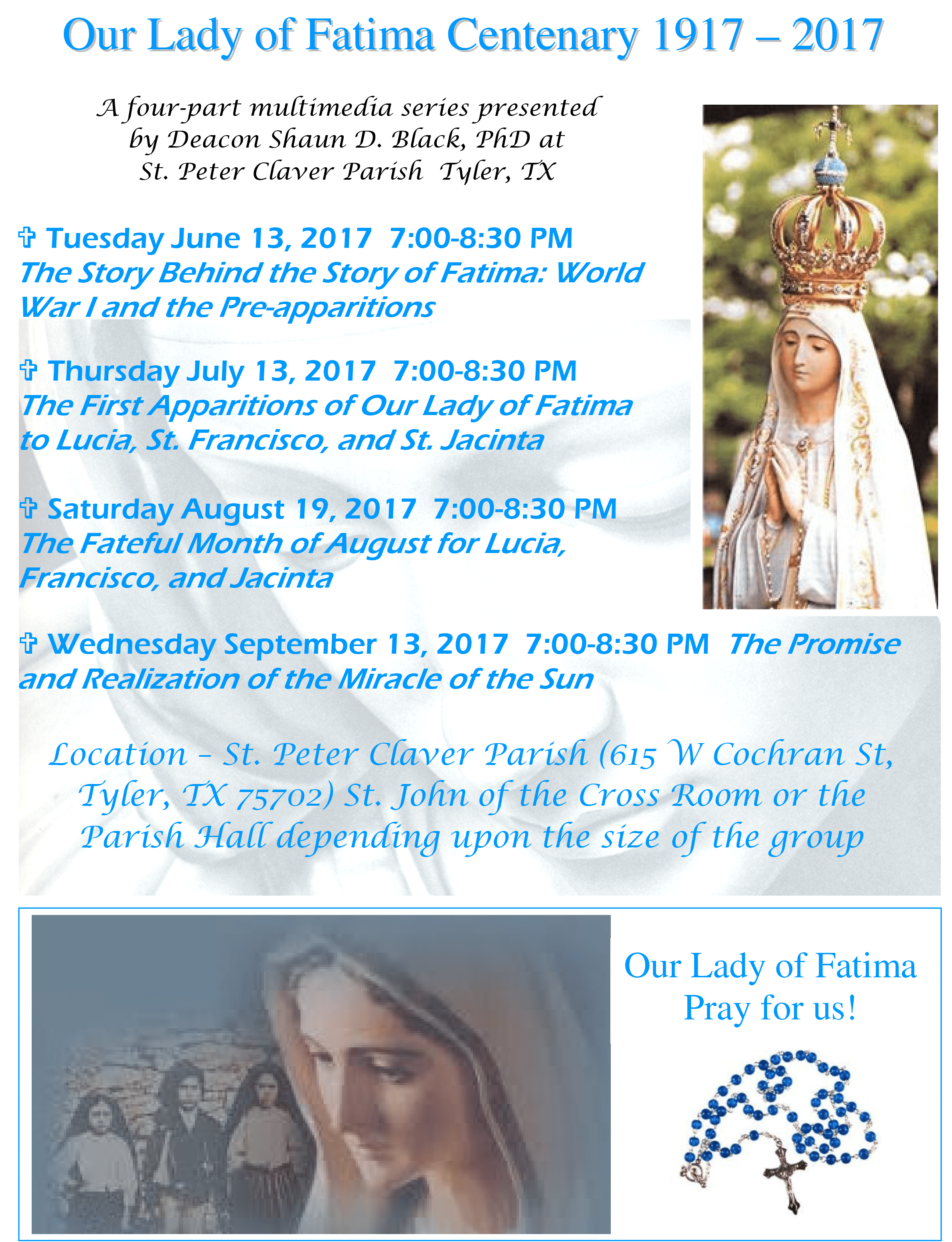 The tours are sponsored and organized by the Alliance of the Holy Family International in partnership with Human Life International in Austria as an appeal to prayer and reparation for world peace and to promote the sanctity of life and the family in the world.

The campaign to each continent featuring the pilgrim images is based on the appeal communicated via Sister Lucia, the primary visionary of Fatima, which was focused on penance and prayer.

The tours are intended to “remind the world of the urgent message of Our Lady of Fatima to pray and make reparations for the sins of the world and (the) conversion of sinners because God is so greatly offended,” said Cynthia Vanzzini, coordinator of the AHFI-Tyler chapter. “When Our Lady appeared in Fatima in 1917, her message to pray and do penance was urgent, but it wasn’t heeded. Now, a hundred years later, we have what Pope John Paul II called ‘the culture of death,’ with divorce, euthanasia and suicide, abortion, total contraception, and homosexuality rampant in our culture. We feel Our Lady’s call to prayer, penance, and reparation is more urgent than ever.”

The AHFI is an apostolate of youth, families, lay professionals, and clergy formed in 1990 to promote devotion to the Two Hearts of Jesus and Mary as a way of life through frequent confession, Adoration, praying the rosary, and participation in the Eucharist. The group is active in more than 100 countries and seeks to help parishes “bring back holiness in the family by enthroning the family and home to the Sacred Heart of Jesus and (the) Immaculate Heart of Mary,” said Vanzzini.

“A holy family makes a holy Church and a holy world,” she said.

The Alliance of the Two Hearts holds monthly “communion of reparation” vigils on First Friday and First Saturday in parishes worldwide, including, in the Diocese of Tyler, the Cathedral, St. Peter Claver, Sacred Heart in Nacogdoches, and St. Mary Catholic Campus Ministry at Stephen F. Austin States University, also in Nacogdoches.

For more information about the pilgrim statue tour or the Alliance of Two Hearts, contact Cynthia Vanzzini at 936-560-6804.