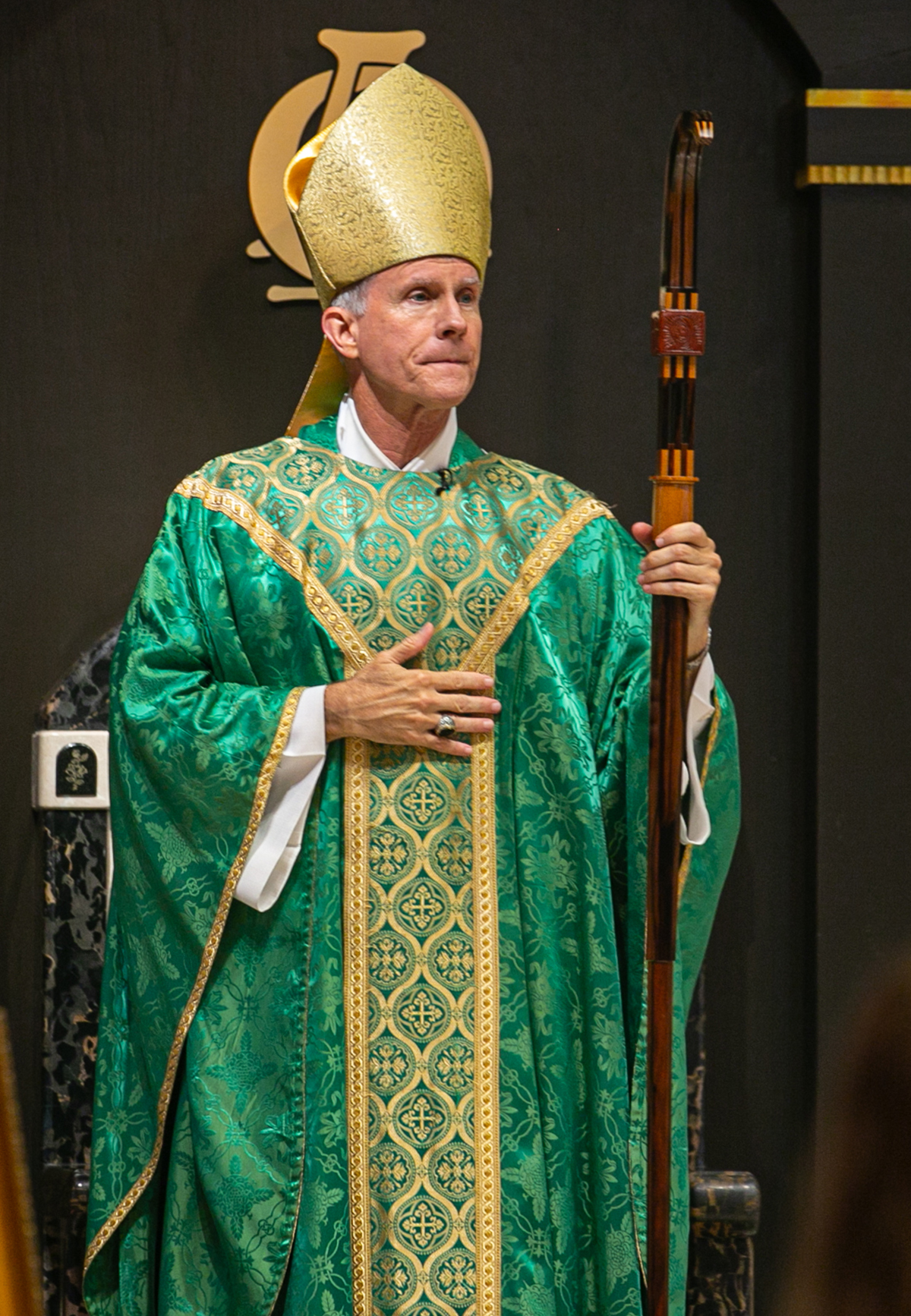 Joseph Edward Strickland serves as the fourth Bishop of Tyler.

Bishop Strickland was born the sixth child of Raymond and Monica Strickland in 1958. He grew up near Atlanta, Texas, where the Strickland’s were founding members of St. Catherine of Sienna Church. Strickland graduated from Atlanta High School 1977. Called to the priesthood, he entered Holy Trinity Seminary and the University of Dallas in August of 1977.

On June 1, 1985, Strickland was ordained to the priesthood for the Diocese of Dallas by Bishop Thomas Tschoepe at St. Monica Catholic Church. He was assigned as a newly-ordained priest to Immaculate Conception Parish in Tyler in June of 1985 and served as parochial vicar until June of 1989.

Upon the creation of the Diocese of Tyler in 1987, Father Strickland then joined the presbyterate of the new diocese and was named the first vocation director in March of 1987 by Bishop Charles Herzig. He was assigned as parochial vicar of Sacred Heart Parish in Nacogdoches in June of 1989 and served there until October of that same year when he was assigned as pastor of St. Michael Parish in Mt. Pleasant. In August of 1992, he  he was assigned to study canon law at Catholic University of America.

After completing his licentiate (JCL) in canon law in May of 1994, Father Strickland was assigned by Bishop Edmond Carmody as pastor of the Cathedral of the Immaculate Conception in Tyler. He was appointed judicial vicar for the diocese in 1995 and was named a Prelate of Honor with the title of Monsignor by Pope John Paul II in 1996.

When Bishop Carmody was named Bishop of Corpus Christi in March of 2000, Mgr. Strickland was elected diocesan administrator for Tyler and served in that capacity until January of 2001 when Bishop Álvaro Corrada was installed as the third Bishop of Tyler.

In September of 2012, Pope Benedict XVI named Msgr. Strickland as the fourth Bishop of Tyler. He was consecrated as bishop on November 28, 2012 by Cardinal Daniel DiNardo of Galveston-Houston.

BLAZON:  Arms impaled.  In the dexter: Vert a Latin cross throughout skewed to dexter Or, the quadrant to dexter base Argent three fir trees disposed in two rows of two and one Vert; in dexter chief a mullet of five points Argent (Tyler).  In the sinister: Gales the Southern Cross composed of mullets of six points all Or on a chief undy Or between the Sacred Heart of Jesus and the Immaculate Heart of Mary both Proper slightly to base an escallop shell Gules.  The shield is ensigned with a galero with cords and twelve tassels disposed in three rows of one, tow and three all Vert and an espiscopal cross standing palewise behind the shield Or with jewels Gales.  Beneath the shield on a scroll is the motto “Ut Inhabitem in Domo Domini”.

EXPLANATION:  The coat of arms of Bishop Strickland combines the coat of arms of the Diocese of Tyler onto the same shield with his personal coat of arms.  The technique of marshaling the two separate coats of arms side by side is called “impaling”.  It is taken from the custom of of displaying the separate coats of arms of two people who are married to each other on the same shield.  Thus, it is symbolic of the bishop being married to the local church.  It is important to n

ote that while the use of impaling is common in the United States, it is by no means a universal custom.  In many parts of the world a bishop will display only his personal coat of arms on the shield alone.

When describing things in heraldic terms the coat of arms is described from the perspective of one standing behind the shield and holding it in front of them.  So the terms “dexter” (right) and “sinister” (left) are then reversed from the point of view of someone observing the coat of arms from the front.

The left side (as we view it) of the shield contains the impalement for the diocese of Tyler.  The main part of the field is green and contains a large gold (yellow) cross that is slightly off center towards the left.  This alludes to the cross from the arms of Bl. John Paul II who founded the diocese.  The lower arm of the cross is longer than the other three making it a “Latin” cross.  In the lower left quadrant the background is colored white and there are three green trees depicted in two rows.  The upper left contains a single silver (white) star, symbolic of the state of Texas.  The right side (as we view it) of the shield contains the personal coat of arms of Bishop Strickland containing symbols having to do with his heritage, his priestly ministry and his personal devotions.  The background or field of the coat of arms is red, a color associated with both Theology and Canon Law.  On this field there is a depiction of the constellation known as the Southern Cross which also appears on the Australian flag.  This alludes to the Australian heritage of the bishop’s mother.  In this coat of arms the constellation is composed of six-pointed stars frequently used in heraldry as an allusion to Our Lady.  The upper third of the shield, called a “thief” is separated from the rest of the field by a wavy line suggesting a river.  This is borrowed from the arms of the Diocese of Dallas from which the Diocese of Tyler was separated in 1986 and for which Bishop Strickland was originally ordained as a priest.  On this chief we see the images of the Sacred Heart of Jesus and the Immaculate Heart of Mary to which the bishop has a great devotion.  Between this and slightly below them is a red escalloped shell.  This shell is borrowed from the coat of arms traditionally associated with several families named “Strickland” and also appears in the coat of arms of Pope Benedict XVI who has appointed Bishop Strickland to the episcopacy.

The external ornaments surrounding the shield indicate the rank of the armiger.  In place of the martial helmet, mantling and crest ecclesiastics use a pilgrim”s hat called a “galero”.  This broad-brimmed hat was, at one time in history, worn by all prelates.  It exists now as a heraldic symbol.  The Church has devised a system of various colors and numbers of tassels suspended form the hat to indicate various ranks of prelates.  Since the original color worn by bishops was bright green this color has been retained in heraldry as the episcopal color.  The galero therefore has twelve green tassels suspended from cords and falling on either side of the shield.  In addition a gold-colored episcopal cross is placed vertically behind the shield and extending above and below it.  This cross, not to be confused with the processional cross used in the liturgy of the CHurch, is a heraldic symbol which has its origins in an actual cross, rather like a processional cross, which used to be carried immediately in front of any bishop whenever he was exercising his office.  Throughout the Middle Ages such crosses were used in addition to the processional cross at the head of a liturgical procession.  Eventually they fell into disuse but remain as a heraldic symbol of the office if bishop.  These external ornaments conform with the Instruction of the Holy See, “Ut Sive Sollicite” of 1969 for the ornaments proper to a coat of arms for a prelate with the rank of bishop.

Below the shield on a decorate scroll we see the bishop’s chose motto, “Ut Inhabitem in Domo Domini” (That I May Dwell in the house of the Lord) which is taken from Psalm 27.

This personal coat of arms of Bishop Strickland was designed and marshaled to those of the Diocese of Tyler by Fr. Guy Selvester, a priest of the Diocese of Metuchen, N.J. and an expert in heraldic design specializing in ecclesiastical heraldry. 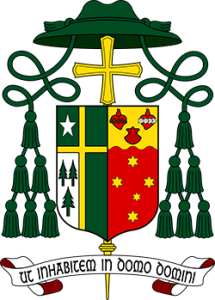 Dear Newcomers to the Diocese of Tyler, I want to welcome you wholeheartedly to East Texas and the Diocese of Tyler. Let us pray that your move to the piney woods is filled with blessings and new opportunities. I’m sure that as you get settled it will be very evident...

END_OF_DOCUMENT_TOKEN_TO_BE_REPLACED

Letter from Bishop Strickland to the Flock of Tyler

Dear Flock of Tyler, As we move through these post-Pentecost days of Ordinary Time, let us continue to seek the peace and guidance of the Holy Spirit. As your bishop, I want to address the controversy that the Church is facing at this time regarding our national...

END_OF_DOCUMENT_TOKEN_TO_BE_REPLACED

Bishop Joseph Strickland presented the annual Bishop Charles E. Herzig Humanitarian Award to CHRISTUS Mother Frances Hospital in Tyler during Mass at the Cathedral of the Immaculate on Sunday, Sept. 14. The physicians, nurses,...

END_OF_DOCUMENT_TOKEN_TO_BE_REPLACED

Pastoral Letter to Conclude the Year of the Eucharist

END_OF_DOCUMENT_TOKEN_TO_BE_REPLACED

Letter on Development of Vaccine for COVID-19

Bishop Joseph Strickland has written a letter encouraging pharmaceutical companies to use ethical methods in the development of a vaccine for the coronavirus and encouraging all to support and pray for this. The Church continues to stand in clear opposition to the use...