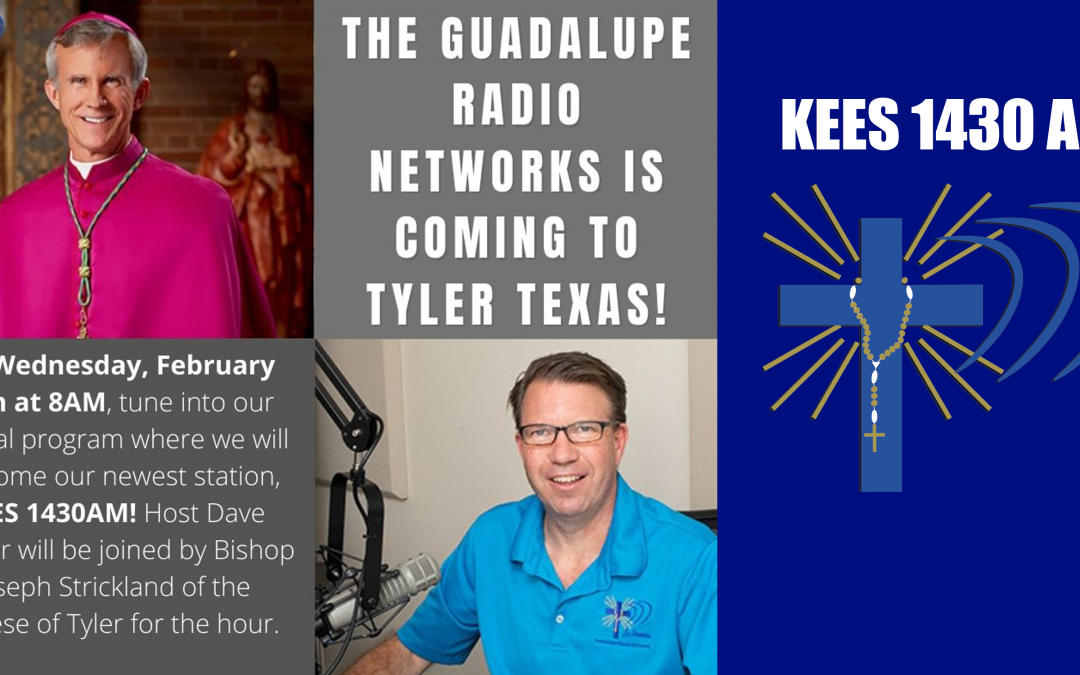 A new Catholic radio station under the management of the Guadalupe Radio Network is coming to the Diocese of Tyler.  The station will launch a special Catholic Radio Kickoff Show on KEES 1430 AM on Wednesday, Feb. 10 from 8 a.m. to 9 a.m. during which Bishop Joseph E. Strickland of Tyler will speak and bless the new station.  The program can also be heard on the Guadalupe Radio Network app which can be downloaded on your smartphone.

The Guadalupe Radio Network is excited to welcome KEES 1430AM as the 39th station in the network.  They currently broadcast on 34 English stations and 5 Spanish language stations in many parts of the country including, in Texas, Dallas-Fort Worth, Houston, San Antonio, and Midland-Odessa where the first GRN station went on the air in the Jubilee year of 2000.  They also have stations in Washington D.C., Pensacola-Tallahassee Fla., and Birmingham, Ala.

The Guadalupe Radio Network is operated by La Promesa Foundation which was formed in 1996 with a Resource center in Midland TX.  For 25 years the mission of La Promesa Foundation/Guadalupe Radio Network remains the same: to joyfully and faithfully spread the Good News of Jesus Christ and His One, Holy, Catholic and Apostolic Church to as many souls as possible.  That’s why the GRN’s slogan is ‘Radio for your Soul!’  The GRN is very excited to work with the Diocese of Tyler and they invite everyone to tune in regularly to KEES 1430 AM, Catholic Radio for the Diocese of Tyler.